Encryption between the Cortado app (end device) and server

Certificates serve to authenticate servers and devices to each other, in order to estab­lish a safe connection between them. They may contain a key, with which the encryp­tion of data to be transmitted is made possible. These keys are protected by a pass­word, which is also stored in the certificate. The certificate received from the server now has to be checked for trustworthiness by the mobile device. To do so, it can use either the corresponding root certificate or the key of the server certificate.

Next illus. shows how the browser of an end device requests an https page – in order, for example, to reach the User Self Service Portal in Cortado Server – and also shows how the Cortado server responds by sending its certificate to initiate an SSL-encrypted connection.

Example of the use of a server certificate

The certificate received from the server now has to be checked for trustworthiness by the mobile device. To do so, it must use the corresponding root certificate. If neither of these is located on the device (or if the specified server address does not match that written on the certificate), the user receives an error message. This could be worded as follows:
“Your connection is not private” (Google Chrome)
You or the users can simply confirm the insecure connection.
In order to avoid these certificate errors and to ensure a secure connection, Cortado Server ensures the root certificate is downloaded by the users themselves with the First Steps Wizard in the User Self Service Portal. 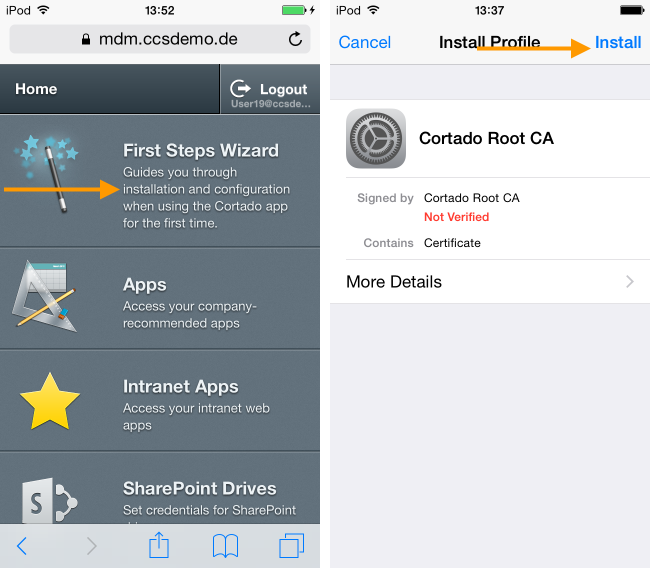 User Self Service Portal: Downloading the root certificate in the First Steps Wizard (example for Apple

Encryption between the Cortado app (end device) and server

An SSL-encrypted connection is also established between the Cortado app on the end device and the Cortado server. This connection enables secure communication via https including user name and password queries. For this, the root certificate is also used. This mode is always enabled.

Example of the use of a server certificate

Example of the setup for a client certificate